As we follow Christianity across the ocean to the Americas you must, by now, see that I have been covering large swaths of history in a single ¾ page offering. This has been unfair. Excellent books have covered far less time periods in far more pages. So this will be the final entry in my cosmic fly-over of the church and its interface with the world around it.

From 1850 to the present, colossal revolutions swept the Church. The rise of American denominationalism, the struggle over the slavery issue, the Civil War, two World Wars, terrible conflicts in Vietnam, Korea, the Middle East, and a seemingly endless cold war with Russia have overshadowed the Church’s stance in the public forum.

Add to that the divisive nature of “Christian” personality cults, our flip-flops during the civil-rights movements, and Westboro Baptist Church’s antics, have all placed the Church at odds with the secular society around us. More recently, the conundrum over LGBTQ issues and the “cocooning” of many evangelical churches and ministries, the faith we love is pretty much a joke for the majority of the nation.

On the plus side, the field meetings of Charles Finney, the urban popularity of Billy Sunday, and the incredible ministry of Billy Graham have done much to keep a positive spin on the true nature of the Christian faith. The ‘70s Jesus People ushered in a new face for a more youthful Christian expression. And where would we be without contemporary Christian music (Hillsong, Rend Collective); even the mainstream music industry has to take notice.

So how do we keep these doors open so the waiting world can at least see a sliver of light of who we are?

Well, at the least we need to unlock the doors from our side. Replacing Kingdom language (King, Lord) with less medieval constructs might be a good place to start. And fewer thee’s and thou’s mighteth help. Charles & John Wesley utilized popular well known tunes and put Christian lyrics to them. We’ve got a good jump on that; let’s keep going.

90% – 95% of Church activities revolve around itself. Think we could change that?!? And what about revising that judgmental attitude toward others?!? Maybe a little more forgiving this time around?

We could, believe it or not, get involved in local government, or run for public office! Maybe even start a soup kitchen, a homeless shelter, or a CEO’s Confidentiality Consortium. When I lived in the northeast, I was asked to join the Pioneer Valley Gentlemen’s Whiskey Association because I was a Christian. Go figure. Opening doors.

God does not want any of us to spend the rest of our days cloistered inside our churches: well, unless you‘re the Pope; and even ee gets out!

Our place is one of intermingling with the people of our society; both with those of influence and those who don’t have a place to sleep tonight. What has the Lord called you to? Get there. And bring the peace, forgiveness, and joy of our Lord with you.

… a glimmer in the dust, 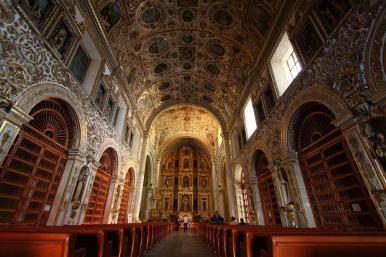 From 1,000 to 1,500, Europe saw unprecedented changes in virtually every aspect of life. The Black Plague and a “Mini Ice-Age” [1312-1850] had decimated the population, while the crop failures of 1315-1322 devastated the economy and the population. The Church in Europe had sunk to the level of feudal governance, charging their adherents for everything—baptisms, funerals, penances, and indulgences (to buy their way into heaven).

The priesthood became exorbitantly powerful and wealthy. During the famines and cold weather they were able to wear warm, elegant clothes and live in luxury, while the hoi polloi could barely keep their rags mended. The Church also had a plentiful storage of food: at one point, wheat prices rose by 320% (France).  It was these extravagances, practices and heretical theology that led a monk in Germany, one Martin Luther, to lash out in protest against the Catholic Church. His actions resulted in what we now call the Protestant Reformation.

Alongside the Church, the rest of Europe witnessed great strides in technology, art, and exploration. The “new world” was discovered by Christopher Columbus in 1492. Themovable type Printing Press, invented by Johannes Gutenberg in 1455, ushered in the first days of the Information Age. In architecture and art, grandiose style of Baroque prevailed. Albrecht Durer (Praying Hands) imported Italian influence into Germany. Leonardo Da Vinci and Michelangelo became the quintessential artists who developed perspective in their paintings and sculpture. Hayden, Handel, Bach, and Mozart scored complex orchestral pieces. Copernicus, Galileo Galilei, and Johannes Kepler proposed a heliocentric (not geo-centric) understanding of our solar system.

The idea of human reasoning as a way of determining Truth was proposed by René Descartes. The idea of common sense came from John Locke. These philosophers, and others, influenced the ideas found in the U.S. Constitution.

In the midst of all these revolutionary inventions, discoveries, new ideas and technologies, where stands the Church? In two words— wealthy and split: no longer between East and West, but between Catholic centralism, and Protestant diversity and expansion. The new Protestant ideologies fostered a rise in creative reorganization and reconstruction. In some ways, this freed Christian thinkers to reexamine Scriptural Truths in the light of the cultural and scientific revolutions of the Renaissance and Enlightenment. Protestant churches became the churches of the people, rather than the authoritative dominance of the clergy in the Catholic Church.

But things were changing. Between 1500 and 1850 the relationship between the Church and her surrounding cultures witnessed great strides in compassion, but also great assaults from the spread of Enlightenment and Renaissance ideologies. Eventually, even American individualism spread throughout Western Culture…, and the faith, with both positive and negative effects. A new secularism in the Church began to erode her influence in our world.

True, the Church had finally opened her doors to the outside world— and she had lost her healing edge.

In a world where most normal people find very few reasons to go to church some of the biggest roadblocks come from the other side— from within the church. Gone are the days of churches trying to be “seeker-sensitive.” People are not seeking anymore; at least not in the direction of the church. The Christian religion is no longer seen as a place to find the answers to life’s deeper question.

Of course, fewer people are even asking those deeper questions any longer. There are just too many other things that demand our complete attention all the time. ALL the TIME! If it’s a choice between sleeping in on a Sunday morning and going to church, guess what wins? If it’s a choice between finding baby sitters for the kids so you can have your car repaired and a quiet coffee with a friend or going to church, guess what wins?

So if you ever get to church and the door locked, the posted information inadequate, or the preacher to be the judge-from-hell, you are most probably NOT going to return. Lousy coffee is also a great deterrent to keep people away. In my opinion, every church should have Starbucks™ level coffee, even if you have to charge for it. Few things in a church better communicate we-don’t-think-much-of-ourselves-or-of-you than bad coffee. End of rant.

Except maybe, the “Them & Us” syndrome. If you’ve ever visited a church and felt totally alone, you are not alone. I’ve been in churches where not one person has said hello to me! And I was the guest-speaker. Things that make you go Hummmmm?

Allow me to suggest that you read further in this article by Joe McKeever. And for Christ’s sake, literally, let’s do something about this stuff.

It seems that some churches have the social savvy of a door knob— which is also locked.