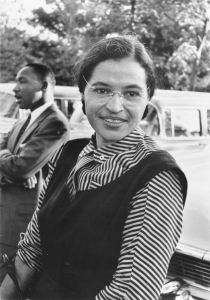 On a cold December day, today, 60 years ago, Rosa Parks (Feb. 4, 1913 – Oct. 24, 2005), an African American, in Montgomery, Alabama, refused to give up her seat to a white man in the colored section when the whites-only-section was filled. For this simple act, she was arrested and branded as a criminal. It is without dispute that her courage sparked what we now call the Civil Rights Movement.

Our world today would find this action ludicrous. Yet, in American culture of 1955, this was an act of defiance; defiance that declared I am an American too, with rights and responsibilities just like you. And all she did was stand up, or, sit-down, for her right to a seat on a bus. For this, she raised the ire and spite of much of our country.

Just this past Thanksgiving, a former Bronco’s QB, Tim Tebow, stood up for his right to refuse to have sex with his now former girlfriend, Olivia Culpo, this year’s reigning Miss Universe. Once again, our nation rises in protest as his Christian faith takes a stand on pre-marital abstinence, in opposition to our pervasive, permissive cultural standard. For this, Tebow has raised the ire and ridicule of a large part of our country.

So…, have we really come so far? Comments welcome.