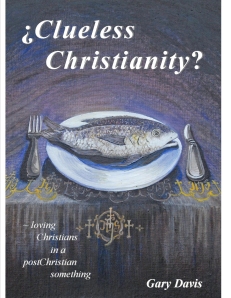 Being a Christian in a New Era:
a generational thing.

I just don’t care! I’m not going to church this morning!

Don’t speak to me in that tone of voice; and you ARE going to church.

No I’m not! Church is boring. All we do is sing songs that are really out if it and then the same sermon every week—three points, there’s always three points, and then you either change or you’re guilty. I’m just tired of not measuring up week after week. So I’m not going to church. You can’t make me.

Well, whether you want to or not you ARE going to church and there are two good reasons why you have to go.

Two good reasons—what are they?

We all joke about this, but underneath we know it’s a real problem. So many people come to church and find it boring, or irrelevant, or strange, or just plain confusing. If it’s your church, whether you are in leadership or attend regularly, you want your worship services to mean something, to make sense, to be relevant, to truly minister to those who come. Our wellbeing and feeling good about ourselves notwithstanding, we need to praise, honor, and encourage the heart of God. But people are somewhat different today than they were ten or twenty years ago. It used to be that if you were seeking the answers to life’s questions you would go to your church, schedule an appointment with the minister, or seek reading material to help you sort it through. Nowadays the BIG questions just don’t seem as important to people. Life has grown so complex; even Christians find it difficult to make consistent commitments to church services or programs. Then there’s this generational thing. Blended worship services, youth councils, and contemporary Christian music, always the music, seems to overshadow everything else. You start with a call to worship, worship songs, maybe a hymn from the hymnal (You remember hymnals—  they came before song sheets, overhead projectors, and PowerPoint presentations). It’s as if the sermon has become secondary to the music! And we still can’t keep our young people. What’s going on?

The fact of the matter is that you’re right— people are different now. Young people find it difficult to relate to the church’s way of doing things. When family structures and society were more stable people did come to church to find answers, to find community, to worship God in a traditional manner. But the breakdown of our society, the dissolution of so many marriages, hippies, Vietnam, Columbine, 9/11, the financial collapse, and two wars have all contributed to the fragmentation and isolation of the generations.  This fragmentation has had a greater impact than we could have imagined.  We set our senior citizens aside to die so we can get on with our lives; this alone constitutes a major fracture in our family cohesion. And thanks to the Baby-Boom of 1946-1964, YOUTH CULTURE does, in fact, dominate our world.

In the summer of ’01 my wife and daughter went on a humanitarian mission to Belarus, a former Soviet “satellite nation.” They were assigned to a summer camp that had formerly been a prison. Living conditions were sparse; meals, no matter what the main course, offered “pasha,” a granular, crunchy, Elmer’s glue-like substance (so reported our daughter). As a fourth world country[i], they were a beleaguered nation—but at night they still danced to the music of the U.S. pop-star Brittany Spears at the discos. And, oh yes, and there was never a shortage of vodka.  Never.  In a country where physicians earned $300 a month, their children moved to the music of the West. If you look you will find the same thing happening around the world from Hong Kong to central China, from Australia to Myanmar.  The music of the West, translated or not, permeates the culture. And the youth live by it. Youth culture has become a culture unto itself, nurtured and fed by older generations who want to grab some of their estimated disposable annual pocket change of close to $153 billion in the US alone. [ii]

So when young people ages 14-25 come to church what do they find, generally?[iii] They find a shape of Christianity virtually irrelevant to their virtual realities. They find a pyramid power structure contrary to their relationally oriented internet networking. [FaceBook, a social networking website, founded by Mark Zukerberg and his college roommates at Harvard in 2004, now has more than 550 million subscribers.] They find, for the most part, the music to be somewhat archaic. One example is the SONIC PRAISE CD (by Sonic Flood) in which the worship leader tries to convince his audience that even “oldies” can have meaning if they are updated musically. I was expecting Amazing Grace or a 1950s youth hymnal chorus spiffed up a bit. The reference was to Shine Jesus, Shine, circa 1982. Ancient history.

But has it ever been different? Well, yes and no. Youth have always found fault with the status quo. They have always wanted to move ahead a little faster than their more conservative seniors. And their parents, grandparents, teachers, and seniors in general, have always criticized their music and style of dress. If anything, with the acceleration in the rate of information exchange and the ease of international communication (Def.- Teenager = mobile phone + texting + ear), teens & twenties not only have easier access to each other, but they can connect so much faster and in so many more ways (cell-phone, texting, Skype, Facebook, etc.) than a few years ago. This, plus their ability to be “early adapters” enables them to become more insular than any generation before them. When our daughter was in high school I joined her to watch an MTV show called Real World. The scenario is a gathering together of 5-8 select teens/twenty-somethings who live together, live on camera, 24/7.[iv] The show presents life as they experience it, with all its romantic developments, breakups and heartaches. As Bethany and I watched Real World it finally hit me like a jolt— if this show was about anything it was not the real world!  It’s a world with no adults, no societal guidelines, no children running, and little personal responsibility beyond remembering to get dressed when you get out of bed in the afternoon and to brush your teeth in case you meet someone. But from this experience I learned something: there is no such thing as “western culture”; rather, there are “western cultures.” The West, has in reality, multi-cultures, defined by generational differences in a big way, by geographic region, by the urban-suburban-rural context, and, of course, by economics.

[ii] Teens themselves spent $105 billion and influenced their parents to spend, on them, an additional $48 billion, for a total of $153 billion annually. “Report of Teen Research Unlimited Study,” Discount Store News, January 3, 2000. Statistic for fiscal year 1999.

[iii] I am well aware that to employ the phrase “churches generally,” is impossible. What is at stake here is the general reaction of unchurched youth to traditional Christian worship, whether or not they employ more contemporary worship music.