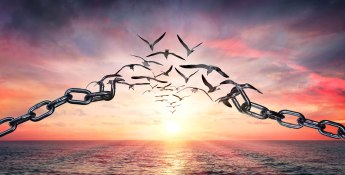 As we move into these last three considerations in What Forges Forgiveness, forgiving others, and/or accepting their forgiveness is often representative of an inner need to forgive yourself. When I was a young boy, 8-16, I was told repeatedly that I could do nothing right; I was always wrong. As I mentioned earlier, I couldn’t even cut the grass right! (According to my dad.) Of course, I did blow up our basement with my Chemcraft Chemistry Set one Thursday afternoon.

My dad was none too amused. He never forgave me: neither did I. I missed my experimentation with things about which I knew very little.

So many of us go through our lives never forgiving ourselves for past failures, real or imagined. We live in a continual state of fear, or of being discovered, or of being ignored because we believe we are not worth that much—not even worth our own self-forgiveness.

I was wrong to not forgive myself. So are you. I needed to forgive myself for the things I had done that were truly rebellious, illegal, and wrong. And I needed to ask forgiveness from others, especially my dad. Had I never forgiven myself, I doubt I would have ever believed that God could truly forgive me. But He did…, so I had better forgive myself as well!

This next section, as well as next week’s, were not easy to write.

For a lot of us, there is a very deep seated need to forgive God. Not that God has intentionally done anything to us; but we often take it that way. Why did my dad die so young? Why God. I asked You to help me get into Princeton, but I didn’t. I, we, wanted to have children of our own, but we didn’t, or couldn’t. Even today, it gnaws away at my soul. I mean, what’s the point?!? I pray and nothing changes. God, You won’t do what I want You to! Really!?!  ‘nuf said.

BUT, arising from the issue of NOT forgiving God, for whatever reason, is the matter of a life-long anger, a grudge, if you will, against God. I’ve seen this resentment grow in intensity within me. “Irrational” does not begin to describe the potency of some people’s hatred of anything religious, or spiritual, or especially, God. “If God exists, I don’t want anything to do with him!” people have told me. Maybe there was, at one time, a reason, an event, a tragedy where “God didn’t come through for me!” but that has long since been removed from our present situation. Now, we are left with only a pure, resolute resentment and absolute anger against Him.

At the very least, this anger will eat away at your soul and spirit until you set yourself to resolve it. It will also eat away at other relationships in your life. Count on it.

But do keep in mind that any of us can chose to forgive God for whatever we believe He has done to us, either by accident, intention, omission, or imagination, at any time. God is not sitting on His Throne in heaven thinking of new ways to hurt you, screw you over, or wreck your life. That makes no sense. Why?

Why would the Lord God Creator of the Universe, and of us, want anything for us other than his best. He is much more the Lover than the Tyrant.

In the next EMPulse, I want us to consider why it is so hard for some of us, OK, me, to receive Forgiveness from God.

NEXT— After There’s Nothing Left— forgiveness from God