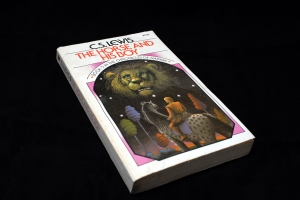 In C.S. Lewis’ children’s book, The Horse and His Boy, there is an exchange between Aslan, the Lion-God of a mythical (?) land called Narnia, and Shasta, wherein Aslan reveals some of the things he has done. Shasta is stunned and asks, “But what for?” (seeking inside information about his friend Aravis.)  “Child,” said the Voice, “I am telling you your story, not hers.  I tell no one any story but his own.”(p.147)

Stories. We all have them; each one of us. Each story is unlike any other; each one of us different from any other. There may be touch-points, similarities, or surprise commonalities, but we each are still unique. So why is it that we are persistently trying to write or live someone else’s story?!? How do we become so discontent with our story?

Could it be a sense of failure, of never being good enough (for your father or mother); maybe we fear our reality and want to be in someone else’s reality. Or could it be envy— that we want what someone else has and think we deserve it more? Of course, if we are living a miserable life, in a deplorable job, in a dead-end, abusive or bland relationship, almost anyone else’s life would seem more desirable. When we are young we want a story that is epic, heroic, and exciting. Most of us live far less adventurous existences.  Nonetheless, far too many of us, for whatever reasons, lust after a life we do not have; we yearn for a story written for another.

Some of us want to participate in the Grand Story—the Metanarrative. Today, the more common opinion issuing from postChristian oracles is, “There is NO Grand Story! So forget it. Go ahead. Write your own story! Other people’s stories be damned. Steal them if you want!” Not unexpectedly, the more we usurp other people’s stories, the more convoluted and confused we become. We become actors in a theatre, playing which ever role suits us for the moment. But these are not our stories; they are only playacting. Conversely, if we do not return to our story, over time, we will lose sight of how it was meant to be written.

So, what IS your Story? Do you know it? How’s the writing going? Your story is yours, uniquely. But are you also allowing room for other story-writers to place their stories beside yours? Please, for your sake, make sure you read their stories; it will deepen your comprehension of your own story if you do. You will also come to appreciate your place in God’s creation-story far better if you do.

Keep in mind that you are not the only writer in your story. On one level, there are many contributing authors who influence your writing from the side— kids, encouragers, detractors, other visionaries, even those who exacerbate you. Yet on another level, you are also a contributing author to a much bigger Story.

Write sagaciously…, and with vigor!